ANYWHERE: A response to extreme meteorological and climate events

A self-sustaining, innovative thematic network on crop protection and the sustainable use of pesticides

The Centre of Applied Research in Hydrometeorology (CRAHI) of the Universitat Politècnica de Catalunya (UPC) is coordinating the ANYWHERE project, aimed at establishing a pan-European multi-hazard platform for faster analysis and anticipation of weather-induced risks prior to event occurrence. It will also improve response management in emergency situations and help exposed populations avert loss of life, damage to infrastructure and economic losses related to these events. For the first time in Europe, the first outcomes of the tools developed within the project will be presented this week in Barcelona. 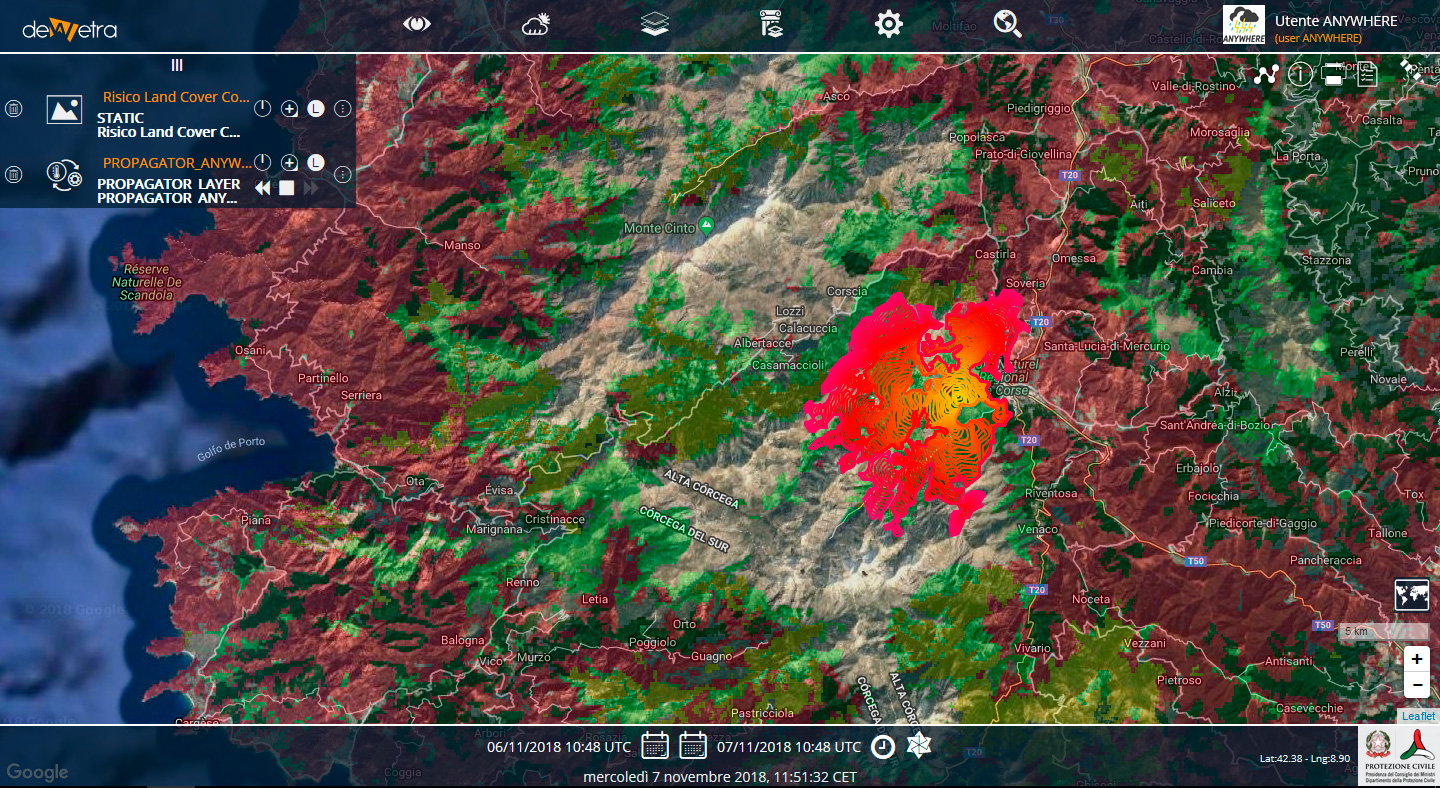 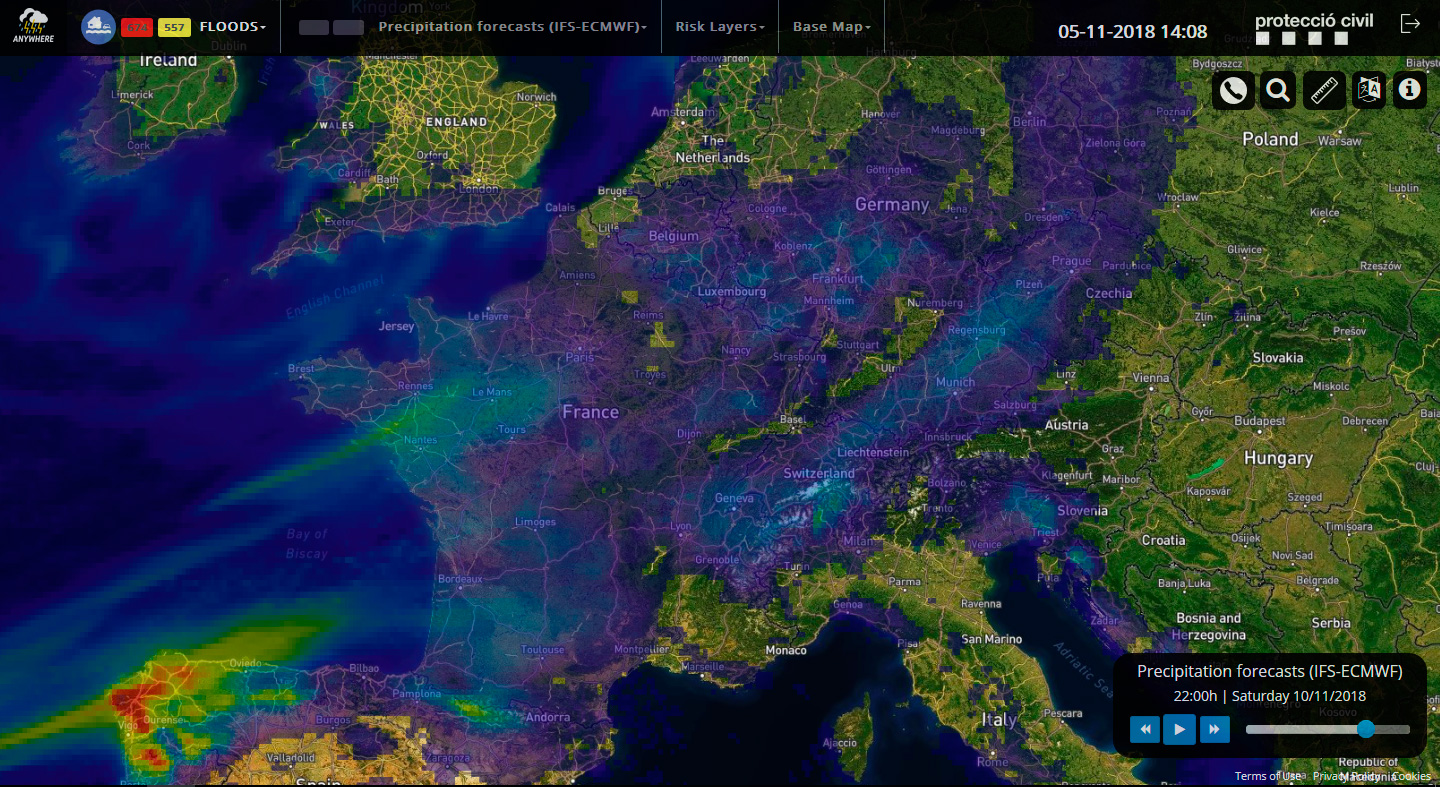 Emergencies induced by extreme and high-impact weather and climate events deeply affect our society and cause huge economic losses. Experts agree that, due to climate change, these phenomena have increased in frequency or magnitude, resulting in more devastating potential impacts for people and goods. At a European level—and Catalonia is no exception—we can find recent examples of extreme episodes, such as the forest fires that hit Portugal in 2017 and Greece in 2018, and the floods in Sant Llorenç, Mallorca (Balearic Islands) and in the Aude department in the south of France, both also in 2018. The best way to successfully face with these events is through preparation and forecasting.

The ANYWHERE (EnhANcing emergencY management and response to extreme WeatHER and climate Events) project aims to tackle this problem. The project started in 2016 and is due to end in 2019, and is funded under the European Union’s Horizon 2020 research and innovation programme with a budget of over €12 million. The partner Consortium is made up of 34 organisations from 11 European countries, combining world representatives of universities and research centres, developers of forecasting techniques, national, regional and local emergency management authorities, and companies in the sector. Together they form the Triple Helix of university-industry-government relationships, which pursues economic development through knowledge. Therefore, this is a user-driven innovation action that not only focuses on scientific achievements but will also reach a pre-commercial stage. 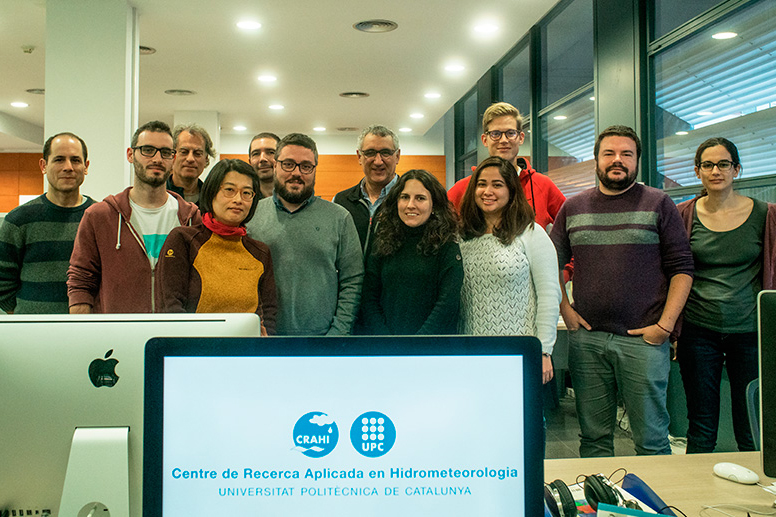 The ANYWHERE platform integrates a Multi-Hazard Early Warning System (MH-EWS) which uses about 300 algorithms and forecasting products sorted by meteorological and climate hazards such as floods, storms surges, heatwaves, forest fires, droughts, severe winds and snowfall. This has been achieved by capitalising on the advanced forecasting methodologies and impact models developed over the last decade.

The platform is designed to help predict the immediate evolution of extreme climate and weather events and the specific impact on a territory, allowing the civil protection and emergency system to respond in order to avoid economic losses and save lives. This tool is able to simulate more than one risk simultaneously and to translate meteorological forecasts into quantitative and measurable impacts, paying special attention to affected people (focusing on inhabited areas) and critical infrastructure (roads, hospitals, schools and certain industries).

The ultimate purpose of the ANYWHERE project, which is coordinated by Professor Daniel Sempere, a researcher and the director of CRAHI-UPC, is to enable society as a whole and the main civil protection agencies to respond more rapidly and effectively than today to extreme and high-impact weather and climate events, and to better cope with the high social, environmental and economic impacts related to them. The platform provides cutting-edge early warning products to help exposed populations prepare for disasters, and also serves as a tool to support decision-making by management authorities in situations of risk. It thus aims to fill the gap between the available science and technology and the real practice of first-responder command centres during weather-induced emergencies.

One-year demonstration period to validate and improve the platform

Within the framework of the ANYWHERE project, an operational platform to support decision-making processes (A4EU) has been developed and implemented in the Public Protection and Disaster Relief (PPDR) control centres of six pilot sites representing different climatic scenarios around Europe: Catalonia (Spain), Liguria (Italy), South Savo (Finland), Bern Canton (Swiss Alps), Rogaland (Norway) and Corsica (France). The scenarios for the pilot tests were chosen on the basis of their diversity (geographic size, orography, population density, most common meteorological risks, etc.) and the interest and commitment expressed by their civil protection services.

The platform, which includes the algorithms and forecasting products, has been locally customised to the specific needs and requirements of each location. Over a one-year demonstration period, starting in October 2018, it will be tested, validated and improved in each pilot site.

The Directorate General for Civil Protection of Catalonia (a partner of the project) defined the features that the tool should have to cover the needs of the Catalan civil protection system. The risk of floods, forest fires, wind storms and snowfall was emphasised. This interaction between end-users and developers helped create a tool (A4Cat) that is already operational in test mode at the Catalan Centre for Operational Coordination (CECAT).

The current version of A4Cat has been designed to meet the following needs: automation of warning systems in order to streamline the reaction and reduce the response time; integration of the available risk/emergency data sources (rain sensors of the Meteorological Service of Catalonia, information from the Catalan Water Agency, phone calls to the 112 emergency number, etc.) to facilitate the monitoring of the phenomena and especially the interpretation and analysis of ongoing risks; higher resolution to predict local phenomena that cannot be easily anticipated today; monitoring focused on critical points (schools, hospitals and prone areas); nowcasting to track potential evolution of events and obtain two-hour advance forecasts; and simplified warnings to better tackle the response with only three levels (yellow, orange and red according to the hazard class).

Through this project, it is planned to make a qualitative leap in the management of risks caused by extreme weather events and potential emergencies associated with them. This improvement might translate into a greater ability to accurately detect serious situations and avoid damage to the population. 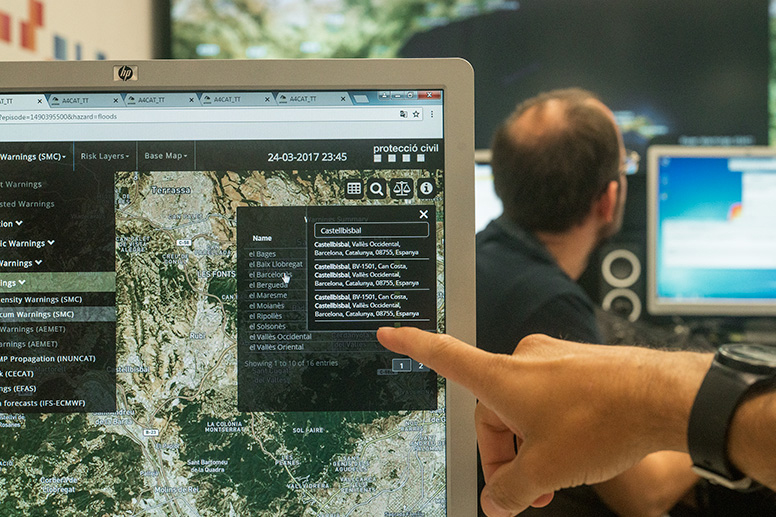