A new solar generator based on the fresnel concentrating system

Researchers from the Sensors and Interfaces Instrumentation (ISI) research group have developed a pioneering method that characterizes a person’s cardiovascular system in seconds.

Cardiovascular disease caused three out of ten deaths worldwide in 2012, accounting for about 17.5 million deaths from the cause, according to statistics released by the World Health Organization. Many of these deaths could have been prevented through early diagnosis, but cardiovascular diagnostic equipment is often complex to use and its cost is beyond the reach of the majority of the population.

Researchers from the Sensors and Interfaces Instrumentation (ISI) research group have developed a new system that, incorporated into a scale capable of measuring body composition in addition to weight, allows a person's cardiovascular system to be monitored in a few seconds. . The new system is easy to use, inexpensive, and can be used outside of the hospital setting (either at home or at pharmacy scales). 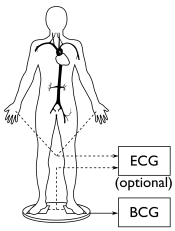 To perform this characterization, the electrocardiogram (ECG), the arterial pulse wave, and the strength of the heart are obtained at each beat (ballistocardiogram). The electrocardiogram and pulse wave are obtained by four conductive contacts on the hands or feet. The ballistocardiogram is obtained from the same sensors that measure a person's weight. The validity of these signals has been verified by recording in parallel with the same scale the heart sounds with a digital stethoscope and the arrival of the pulse wave to different parts of the body with a tonometer. All you have to do is climb on the scales and grab the Cardiovascular Scale with your hands and the measurements are obtained in a few seconds. The results of each parameter can be transmitted from the scale to any computer, tablet, mobile or device with wireless technology.

A preclinical validation of the prototype will soon be carried out at the Bellvitge Health Sciences Campus of the University of Barcelona.

This prototype complements CardioSense, presented at Mobile World Congress 2017, an easy-to-use and affordable electrocardiograph that provides cardiovascular prediagnosis in less than a minute. The prototype presented at IoT has been developed within the Product Program of the Generalitat de Catalunya and has been co-financed with the European Regional Development Fund (ERDF) of the European Union.