Development of a redundant road safety system for autonomous vehicles

The SEAT-UPC Chair, along with experts from the car company, have designed various protypes for electric charging and battery swapping stations for micromobility, based on sustainable energies adapted to various areas in the urban space. This project is aligned with the recently approved regulations of Barcelona City Council that aim to introduce 550 electric car stations in the city, to promote the energy transition to sustainable mobility.

In terms of urban design, cities such as Paris, Stockholm, Boston or Barcelona are exploring what mobility will be like in the future, when sustainability and personal mobility will occupy a central position. A new conception of urban spaces is being developed that responds to current social requirements through the use of emerging technological opportunities. In this urban mobility, personal electric micromobility (small electric vehicles such as scooters, bicycles or motorcycles) such as the SEAT MÓ 125 model, which is already being introduced for private and shared use, will require the integration of these new vehicles and their charge points into the urban fabric of cities.

In the context of the SEAT-UPC Chaira team from this University, along with experts from SEAT S.A., has proposed new functional (multiservice) modular structures for electric charging and battery swapping for micromobility. The structures are energy self-sufficient and can be fully integrated in the urban landscape. Universitat Politècnica de Catalunya · BarcelonaTech (UPC) Ana Puig-Pey, Joan Lluís Zamora, Joan Moreno i Beatriz Amante, along with Mireia Gilibert and Héctor Rallo, who are experts, respectively, in urban mobility and second life batteries at SEAT S.A., have supervised a group of four bachelor’s degree students to carry out the project.

Barcelona is the first city in Spain to have regulated the implementation of charging stations with the aim of installing over 550 supply points throughout the city.

In this context, the challenge of the project was to study how cities such as Barcelona should integrate new mobility infrastructure, specifically a micromobility charge network, into their future urban planning. 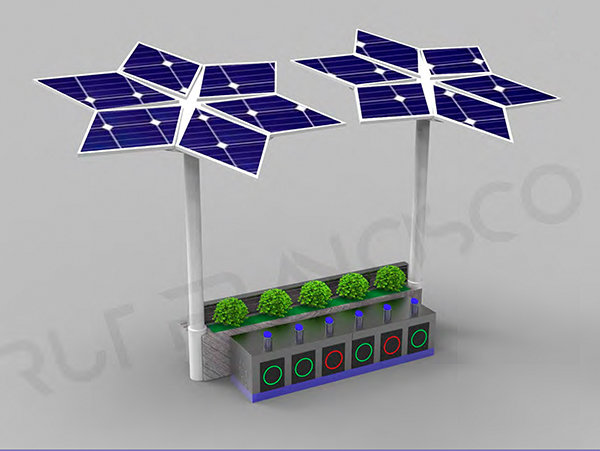 “The drive towards electric mobility requires the establishment of a good network of electric charge and battery swapping points in cities,” explains Mireia Gilibert, who is in charge of future mobility projects at SEAT S.A. “On this basis, what we considered with this project is that as these points are located in a public space, they should provide fast charging from clean sources and also serve for other purposes. We worked on a series of designs of prototypes that show that these installations could be perfectly integrated into the urban space and at the same time have other uses for the public, such as sitting on adjacent benches,” said Gilibert.

“The project addresses research, from a multidisciplinary perspective, on how to integrate a new system for energy capture and storage (specifically, second life batteries) in the city’s urban space to convert them into charging points for micromobility and provide an added value for the public space,” added the person responsible for future mobility projects at SEAT S.A.

A total of eight charge stations were designed for electric vehicles for private use or sharing. They were conceived for slow charging by cable and for battery swapping.

The structure of solar trees inspires the two prototypes designed by Rut Francisco, student of the bachelor’s degree in Industrial Design and Product Development Engineering at the Terrassa School of Industrial, Aerospace and Audiovisual Engineering (ESEIAAT). The first implements battery swapping and consists of a structure of two solar trees, joined together by a plant stand. The structure enables extra energy to be obtained to charge and feed the circuit of the second life batteries. In the front are the various batteries showing which are already charged. Above is a reader to request the battery swap from a mobile phone. At the back is a bench, designed to give another use to the structure.

The second model implements a slow battery charge system by cable. In this case, the solar trees are joined by a central structure, subjected by lateral metal plates and cylindrical upper and lower bars. It includes a screen for publicity that could show information of interest for the users, such as a map of other electric charge points in the city. In the frontal part are readers to be able to request the supply of energy to the motorcycle. 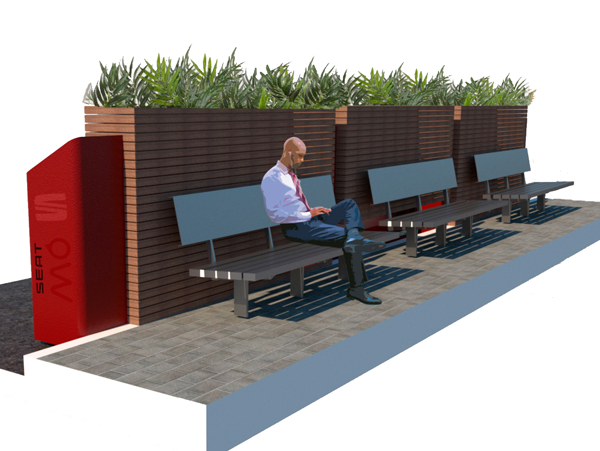 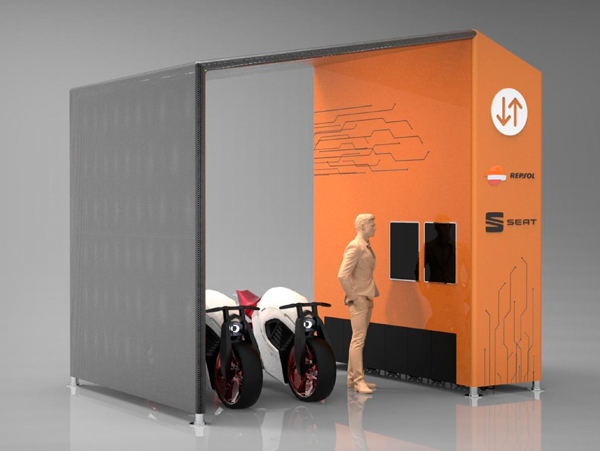 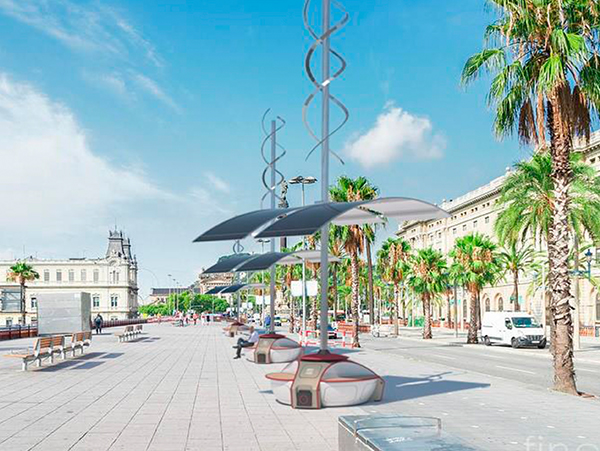 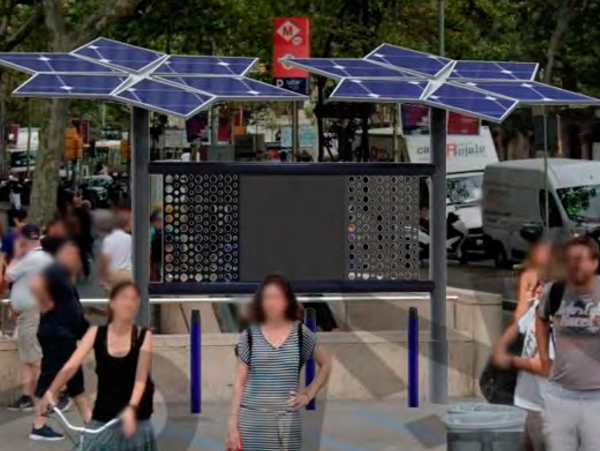 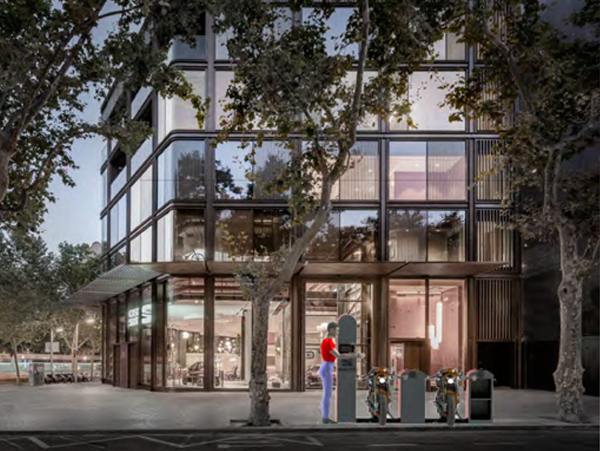 The proposal by Jesús García Lucas, bachelor’s degree student in Architecture Studies a Barcelona School of Architecture (ETSAB), is for two SEAT prototypes for a network of electric charge points for motorbikes or small vehicles. Th first of these models covers two needs: electric charging and public lighting. It consists of a vertical structure in the form of a mast that combines the generation of wind and solar energies with photovoltaic panels and a wind generator in the upper part, as well as a base of aluminium and steel where the plugs are installed for electric charging.

The second proposal is associated with facilities and buildings with high activity such as primary and secondary schools, on whose roofs photovoltaic panels would be installed to generate energy. At street level, in front of these buildings, the proposal is to add an element of street furniture to charge scooters, electric motorcycles and even mobile phones. This element would include on one side a battery dispenser and on the other a bench.

The creation of prefabricated modules in service stations for swapping electric motorcycle batteries is the project of Nil Lin Farré, a student of the bachelor’s degree Industrial Design and Product Development Engineering at the ESEIAAT. In this proposal, batteries, enclosed in a cubicle with doors are dispensed when the user makes an order on a screen.

In addition, the proposal is to construct shelter structures containing batteries to install at petrol stations. These structures are complemented with chill out zones for drivers who are waiting to charge their vehicle.

Two other prototypes present new energy storage and charge systems for electric motorbikes to install in public spaces, whether these are squares, entrances to premises or public carparks. The first is comprised of a double aluminium and steel structure that is easy to install and designed for self-service charging, with swapping or second life batteries.

The second proposal consists of an installation of steel, aluminium, recycled wood and methacrylate, formed of three blocks in which the second life and swapping batteries are stored. Self-service is enabled through a control screen and the capture of energy at off-peak times. The battery without charge is left in a space at ground level. Both proposals are by José María Vila, student of the bachelor’s degree in Industrial Electronics and Automatic Control Engineering at the Barcelona East School of Engineering (EEBE).