ECUVal: A new system that will allow savings of between 70% and 100% in water and up to 100% in salt in textile dyeing processes

My-Trac: a platform to optimize and promote public transport

Results were presented for ECUVal, a European project coordinated by the Innotex Center/INTEXTER, whose objective was to design and build an innovative, ecological system for treating dyeing wastewater with high concentrations of dyes and salts, without using chemical reagents. 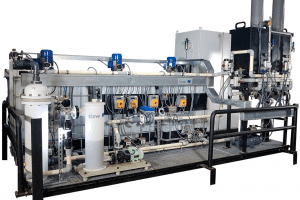 The ECUVal system degrades the reactive dyes in textile dyeing and washing effluents with an electrochemical system combined with ultraviolet radiation. The value given by ECUVal is that chemical reagents no longer need to be added to remove dye waste, because the new system uses the salts present in the effluents themselves as electrolytes. No other waste requiring additional treatment is generated. At the end of the ECUVal treatment, a colourless water that has a given salt content is obtained, and this can be reused in new dyeing processes.

With this system, the consumption of water in dyeing processes is reduced by between 70% and 100%, and up to 100% in the case of salt, which leads to substantial savings for companies and improves the processes from an environmental point of view, reducing the generation of CO2 and the carbon footprint by more than 50% compared to conventional processes.

The project’s total budget was 1.4 million euros, of which half was funded by the European Commission’s Executive Agency for Small and Medium-sized Enterprises. The Private Foundation for Textile Innovation (FITEX) and the companies Icomatex and Grau participated as partners.