RESOLVD: Improve the efficiency of grids

Smart monitoring of a hydroelectric plant

The Bioinformatics and Biomedical Signals Laboratory of the Research Centre for Biomedical Engineering (CREB UPC) has developed an early detection system for Alzheimer’s disease through identification and characterization of cortical and subcortical areas of the brain in healthy adults.

A study undertaken by the Bioinformatics and Biomedical Signals group of the Research Centre for Biomedical Engineering (CREB UPC) focused on current and future diagnosis of Alzheimer’s disease (AD) has identified and characterized cortical and subcortical areas of the brain in healthy adults. The objective was to identify patients in an initial stage of the disease with mild cognitive impairment and thus predict the future progression of dementia due to Alzheimer’s.

The characterization and identification of these key areas through statistical learning methods has led to the development of models that can predict a current diagnosis with over 90% accuracy; and predict a future diagnosis of progression to Alzheimer’s disease up to 1.85 years in advance. 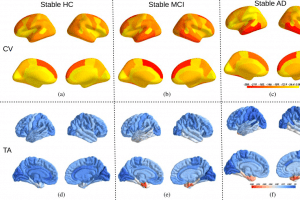 Alzheimer’s is a neurodegenerative disease characterized by pathological changes in the brain that start several years before the first clinical symptoms appear. The early, accurate identification of these neuropathological changes is crucial for the disease to be tackled in its first stages, before irreversible morphological and mental deterioration occurs. Ageing is the main risk factor, and the prevalence of the disease is increasing as the global population ages. We know that elderly people’s brains are more susceptible than those of young people. However, this study has identified that the brains of healthy elderly people and those of subjects in the intermediate phase of mild cognitive impairment (MCI) also present morphological changes in regions relating to Alzheimer’s disease and follow a frontotemporal pattern.

This study is based on longitudinal biomarkers of neurodegeneration obtained from the magnetic resonance images (MRI) of approximately 800 participants in the multinational Alzheimer’s Disease Neuroimaging Initiative study. The study population includes participants who were initially classified as healthy (or controls), others with mild cognitive impairment due to Alzheimer’s disease, and others with advanced Alzheimer’s disease. The biomarkers, together with other psychological and sociodemographic characteristics such as age, sex, and level of education, were observed during exhaustive monitoring over five years.

The biomarkers that changed significantly and those that changed slightly were characterized in healthy participants with no indication of dementia to create null models that established the pattern of normal brain atrophy due to ageing.

The degree of change in the neurodegeneration biomarkers of the remaining groups (those with mild cognitive impairment and those already diagnosed with Alzheimer’s disease), were compared with values inferred from the null models, and differences or residuals were calculated for each biomarker. From the results of the residuals, artificial intelligence models were designed that could discriminate normal residuals from residuals with an intrinsic pathological factor, which are indicators of the presence of early-stage disease.

The results of this study have been published in the journal PlosOne and in Giovana Gavidia’s doctoral thesis, as part of the doctoral programme in Biomedical Engineering at the UPC.