ARIADNA draws to a close: a European project to promote the use of GALILEO satellite technology applied to urban mobility

The Maritime Engineering Laboratory (LIM) of the UPC and the Institute of Agrifood Research and Technology (IRTA) have developed a model of dispersion of water discharge from rice fields in Fangar Bay using rhodamine, a soluble, innocuous red colourant, to determine the paths of discharge and minimise their impact on the aquaculture of bivalve molluscs.

The Ebro Delta forms a complex ecosystem in which natural dynamics coexist with production activities such as fishing, aquaculture and agriculture. It is a fragile balance and, to preserve it, it is vital to understand the effects of these activities on the environment that surrounds them. In the case of rice crops, the main agricultural crop in the Delta, one of the main impacts is irrigation water discharged into the sea. This discharge has two contrasting effects: it provides nutrients for the ecosystem but at the same time contains toxic components of pesticides that can affect biodiversity.

This new model that was developed will enable rearrangement of aquaculture activities in the bay by establishing a transition zone of around 80 hectares where bivalves cannot be farmed to avoid risks to animal and human health. A protocol will be established to apply these protection measures to other areas of Catalonia.

Over two days, the dispersion of the rhodamine stain was monitored using flowmeters and the directions and speed of water on the surface was studied using Lagrangian derivatives. This information, triangulated with previous knowledge of the circulation of water in the Delta zone, was used to generate a three-dimensional, high-resolution numerical model that can simulate the behaviour of currents in the bay by incorporating irrigation water and considering different wind conditions. 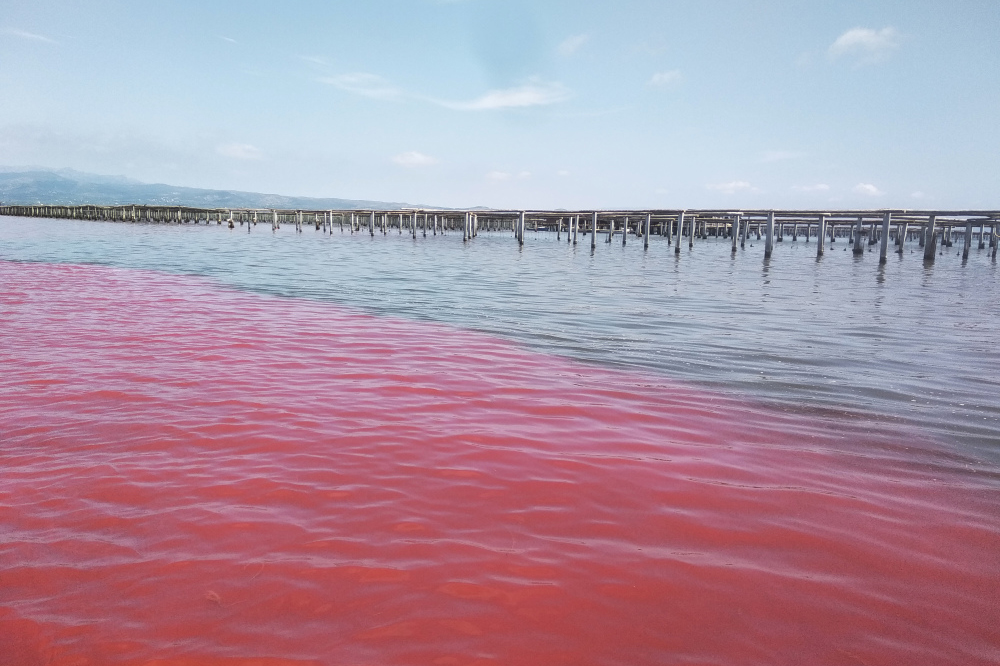 A second objective of the research was to establish a protocol to apply this protection measure in other areas of bivalve mollusc production on the Catalan coast.

The model developed with rhodamine and its continuation with a project to assess bivalve mortality risks were co-funded by the European Maritime and Fisheries Fund and the Directorate General for Maritime Policy and Sustainable Fishing. In addition, the Federation of Mollusc Producers of the Ebro Delta (Fepromodel) and the Comunidad de Regantes - Sindicato Agrícola del Ebro (Community of Irrigators – Agricultural Union of the Ebro) collaborated in the project.

Determine the cause of mortality

The project was launched in 2020 after various episodes of extraordinary mortality of adult oysters of commercial size in some of the oyster beds in Fangar Bay during previous years. These losses, which reached up to 50% in some cases, were not associated with the most common causes, such as the herpes virus or high temperatures. Some of the affected mollusc farmers indicated a link with the cycles of discharge of irrigation water from the rice fields, which particularly in the months of May and June could contain traces of polluting substances. The subsequent observations of the IRTA and UPC also confirm a spatial correlation between the zones that are most affected by mortality and those that are most directly influenced by the effluent from irrigation discharge.

However, according to the results, it cannot be confirmed that the cause of mortality is the chemical agents of the pesticides, which are already subject to specific environmental regulations. The first diagnoses of bivalves indicate that these components have an indirect effect, that is, the impact is caused by a combination of agents. For example, the pesticides may make the bivalves more susceptible to pathogens in the marine ecosystem. In the framework of research planned up to 2023, various pathogens will be isolated and inoculated into healthy oysters to assess the risks of chemical and microbial origin and take subsequent measures to mitigate their impact.

Meanwhile, in Fangar Bay a first step can be taken by implementing the transition zone; the first applied to aquaculture of bivalve molluscs in Catalonia. Also known as a buffer, this is a preventive public health measure proposed in the European good practices guide. The Directorate General for Maritime Policy and Sustainable Fishing has already received the map of the area that is unsuitable for bivalves, which could be considered when new aquaculture licences are processed or the area of aquaculture infrastructures is reorganized.

Food, agriculture and the marine environment