DIVINE – Improving care for COVID-19 patients based on risk factors

The Advanced Center for Mechanical Technologies (CATMech) of the Universitat Politècnica de Catalunya (UPC) has participated in the Piezoroad project, led by the company Sorigué with the aim of developing a piezoelectric generation unit integrable on the roadway, and reproducible on large surfaces.

In the not too distant future, we will have to respond to the electricity demands from future intelligent roads from a robust system, independent of environmental conditions, distributed in the territory and viable in terms of costs.

The technology of piezoelectric generators embedded in the roadway responds to these needs, as it is a system that depends only on the presence of traffic and, as it is installed in the same pavement, is reliable. In addition, it obtains the energy of the users themselves from the road and where it is needed, covering the payment aspects for use and generation of proximity and distribution.

Within the framework of the project, different types of piezoelectric elements have been characterized by establishing a system of comparison independent of the drive mode and the type of firmness, supplemented by a mathematical analysis of the expected response and numerical simulation of the tests performed. Thus, it has been possible to establish objectively the type of piezoelectric to be used, the cost of which is euro cents, and which therefore allows scalability.

Ad-hoc drive and protection system has also been developed for the chosen type of piezoelectric, assessing mechanical design alternatives, positioning and agglomeration of generation units, as well as electrical connection types and signal conditioning circuit. These alternatives have been evaluated experimentally and with numerical simulations.

Finally, the type of firmness and positioning in the surface layer that are most favorable has been defined, making realistic wheel trials. Installation procedures have been set up under realistic conditions of generation units, the cost of which, once the manufacturing procedure has been industrialized, is estimated at approximately 1€.

The Piezoroad project has had a budget of 502.303 euros from the Centre for Industrial Technological Development (CDTI), has been coordinated by the company Sorigué and has lasted for two years (July 2019 – July 2021). 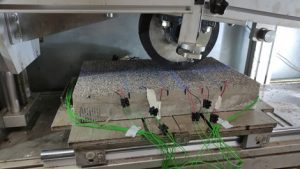