Optimization of the termal comfort of elderly people in redisential homes

A new material for manufacturing insulation for footwear by reusing tyres

The UPC, the 'spin-off' Sense4Care and the Centro Médico Teknon-Quirónsalud have developed STAT-ON, a unique device in the world for monitoring the motor fluctuations associated with Parkinson’s disease.

The device consists of a small sensor, which is held in place in a specially designed belt. It can be used to continuously monitor a Parkinson’s disease patient’s status in their home environment. 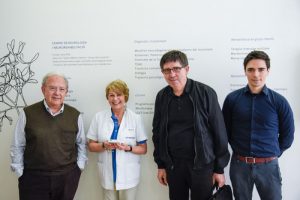 Current treatment of Parkinson’s is symptomatic, designed to compensate for the absence of certain neurotransmitters such as dopamine. After around two years of effective control using levodopa (the precursor to dopamine), fluctuations of around 50% appear in patients.

As a result, the motor symptoms of advanced Parkinson’s fluctuate several times a day in relation to levodopa levels. These are known as "on periods" and "off periods", and they are the result of the availability or absence of dopamine in the brain. "On" periods typically begin soon after the person has ingested medication, and they are generally when patients feel good and enjoy practical, normal control of movement. "Off" periods are generally when motor symptoms appear, severely limiting many patients’ mobility and independence. These ON/OFF fluctuations make it difficult to maintain the clinical stability of patients and they have to be controlled by adjusting the medication at each stage. 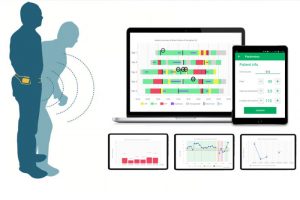 STAT-ON makes it easy to constantly monitor the on/off fluctuations experienced by patients who have under levodopa treatment for several years. It also monitors other motor symptoms experienced by the person (bradykinesia, dyskinesia and freezing) in order to allow for much more precise treatment and significantly improve patients’ quality of life. In addition, STAT-ON can monitor gait parameters, falls and other characteristics of movement that allow for improved management of the disease.

The device will help doctors to take informed decisions for the best possible management of the disease and it will help to precisely determine the patient’s real status.

Holter is designed to adapt to each person. Initially, it learns from a person’s movements. Then, through the application of artificial intelligence, it personalizes the algorithms it uses to register motor symptoms. Subsequently, the Holter works autonomously. While carried by the patient, it does not require any sort of activation or connection. At the end of the day, it generates a report on the patient’s motor status throughout the day.

The final development of the Holter was partially funded by the European Union through a project for small and medium-sized companies.

The incidence of Parkinson’s disease has grown in recent years, largely as a result of longer life expectancies in the general population. Over 7 million individuals worldwide have been diagnosed with this neurodegenerative disease, and of these 1.5 million live in Europe and 150.000 in Spain. This disease causes serious motor problems throughout its evolution and may result in freezing as well as hidden non-motor symptoms including pain, apathy, confusion, difficulty speaking, disturbed sleep and depression. According to data from the Spanish Society of Neurology, each year 10,000 new cases of Parkinson's are diagnosed, and it is the second most frequent neurodegenerative pathology, after Alzheimer's.