A UPC team, CARNET, and its industrial partners, coordinated by the Institute of Robotics and Industrial Informatics (IRI), has designed and manufactured a prototype of an Autonomous Delivery Device (ADD), to automate last-mile logistics. The vehicle will be tested this year in various pilot tests in Esplugues de Llobregat, Hamburg (Germany) and Debrecen (Hungary).

The Autonomous Delivery Device (ADD) will be tested in various pilots and used to automate last-mile logistics.

The ADD prototype, designed under the coordination of CARNET, was presented for the first time on 16 December 2021, in a meeting with CARNET’s industrial partners held in the office of the rector of the UPC.

The ADD project aims to analyse how autonomous delivery devices could improve the urban distribution of goods in general, quantify the potential impacts, and undertake tests in real city environments.

The distribution of products to metropolitan areas has increased in recent years in absolute values, frequencies and quality requirements. In the future, the growth of electronic commerce and the new characteristics of supply chains (just in time, zero stock, delivery in increasingly narrow time slots) will put even more pressure on the physical distribution of goods in crowded urban areas.

From the perspective of the city, the urban distribution of goods has various negative effects. It worsens habitability in urban areas in terms of traffic, air quality, noise pollution, use of public land and deterioration of road surfaces.

Traffic jams in towns and cities, the lack of parking places for loading and unloading commercial vehicles and local regulations mean that management of the urban distribution of goods has a very high cost for logistics companies. The costs of last-mile delivery (the last section of the supply chain between the distribution centre and the final customer) represent up to 40% of the total transport costs or over 20% of pollution in cities.

The introduction of autonomous vehicles will lead to a notable reallocation of the costs of delivery drivers and will make the service more economical and efficient than with standard vehicles. In fact, autonomous vehicles could operate in off-peak hours or even during the night, when there is less traffic. Many companies are already introducing autonomous delivery devices (ADD) to the market to reduce operating costs. Although some autonomous delivery services are being tested in public settings, these initiatives are clearly in the minority and most pilot projects are currently being introduced in controlled environments.

In this context, the Universitat Politècnica de Catalunya · BarcelonaTech (UPC) and CARNET, the research hub on future mobility coordinated by the CIT-UPC Technology Center, have designed and manufactured an ADD prototype that could move in urban environments.

CARNET, founded by the University, VW Group Research and SEAT in 2014, has fifteen industrial partners. The ADD prototype, which was designed under the coordination of CARNET, was presented for the first time on 16 December 2021 at a meeting of industrial partners that was held in the rector’s office of the UPC. The autonomous vehicle circulates at a maximum of 20 km/h. Its dimensions are 170 cm x 110 cm x 100 cm. It has six wheels and can go up and down steps of up to 20 cm height.

The ADD project began in 2017 with the ‘Logistic Service’ study developed by the UPC Barcelona School of Civil Engineering (ETSECCPB). In this study, the logistic service with ADD was conceptualised, the needs of the vehicle were identified, and the potential and impact of autonomous robots was analysed. In 2019, various studies were carried out on the second uses that these vehicles could have. It was concluded that in addition to delivery tasks, ADDs could analyse the quality of the road surface or the air using the data provided by the vehicle’s sensors and a computer vision algorithm. 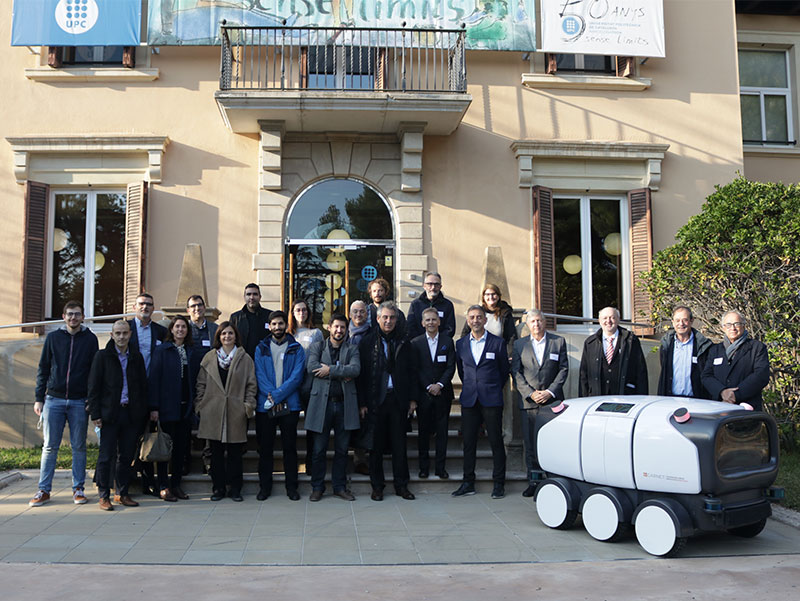 The current prototype began to be designed in 2018, through collaboration between experts from CARNET and Rücker Lypsa, currently EDAG, an industrial company that is a CARNET partner. In recent years, the functional platform has been developed. In 2020, the chassis was completed and in 2021 the delivery service.

Previously, in the fifth edition of the Creative Lab programme of the Terrassa School of Industrial, Aerospace and Audiovisual Engineering (ESEIAAT) in 2019, a communication system between ADD, users and citizens was defined that interacts with autonomous vehicles on the street. Creative Lab is a leading university-company initiative in Spain, established so that students can generate new ideas to redesign the concept of urban vehicle and develop a new concept of mobility in the city. Students in multidisciplinary teams work on various challenges proposed by SEAT and Volkswagen Group Innovation engineers, guided and supervised by lecturers from the school and professionals from the company.

Furthermore, a study carried out in 2021 by the Barcelona School of Civil Engineering analysed various models of urban consolidation centres for goods.

Currently, the Institute of Robotics and Industrial Informatics (IRI), a mixed centre composed by the UPC and the Spanish National Research Council (CSIC), is working on robot sensors, under the coordination of the lecturer and researcher Alberto San Feliu. This year, ADD will be tested in three real environments: initially, in Esplugues de Llobregat, then in Hamburg (Germany) and finally in Debrecen (Hungary). These activities will be carried out as part of the Logismile project, which starts in January 2022 and is partially funded by EIT Urban Mobility, an initiative of the European Institute of Innovation and Technology (EIT) to promote more sustainable, inhabitable urban spaces.