Modeling transport in the inner ring or Barcelona Metropolitan Area

inLab FIB UPC has presented the first results of the Virtual Mobility Lab (VML), a project developed as part of the urban mobility innovation hub, CARNET. The aim of the VML is to develop new tools for urban planning. VML can analyse and assess the impact of smart mobility projects in Barcelona, and its results can be extrapolated before a pilot project is implemented.

As part of the Virtual Mobility Lab (VML) project, inLab FIB UPC has generated the first detailed multimodal model of the inner ring of the Barcelona Metropolitan Area, which includes the offering of all public transport modes, private vehicles, and the updated mobility demand. Once it has been validated and calibrated, the new model will support decision-makers on mobility policies, transport operators, and new companies that develop new mobility alternatives and wish to assess them. 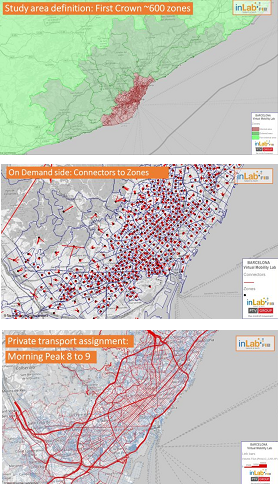 The inner ring is comprised of 18 municipalities and has been divided into 630 Transport Analysis Zones (TAZ) that are compatible with the hierarchy of administrative divisions (regions, municipalities, districts, and census tracts). The zoning criteria were: similar population in all zones (around 5000 people/TAZ) and similar uses and infrastructure access. Transport hubs were considered separately (such as the airport). The city of Barcelona was divided into 350 TAZ, which were used in the analysis.

The project was initially presented at the Smart City Expo World Congress 2017 in the CARNET area (on the SEAT stand) and on the UPC stand. Other collaborators in the project are SEAT, PTV IBERIA and Kineo.