Innovative technologies for reclamation of urban and industrial wastewater

The Biomechanics Area of the Research Centre for Biomedical Engineering (CREB UPC) is participating in a pioneering project to introduce the use of exoskeletons in the automobile industry, to reduce the muscle activity of employees in certain production line tasks and thus improve their health. 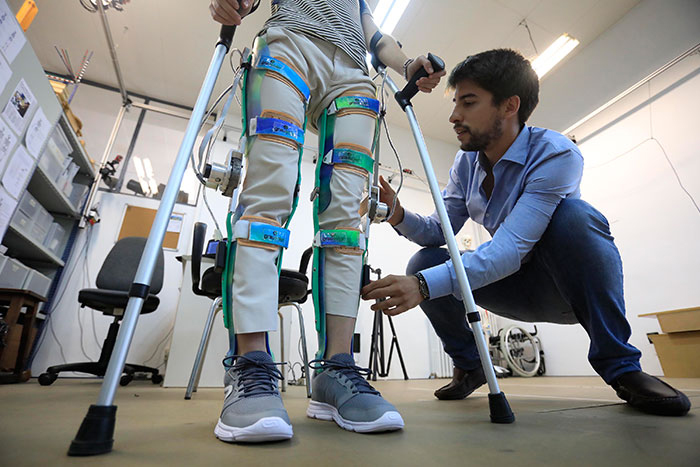 The use of exoskeletons in industrial automobile production processes could reduce the muscle effort of employees by up to 60%. This figure is taken from a study promoted by the Automotive Industry Cluster of Catalonia (CIAC), in a controlled environment with employees of Nissan and Meleghy Automotive to test the exoskeleton on the lower limbs in maintained positions.

This is the only initiative developed to date to assess the viability of this disruptive technology in the automotive industry, which has the approval of the government and represents a revolution and a challenge for companies in the sector.

The study, directed by CIAC Technological Committee, has completed the first phase with monitored surface electromyography tests performed jointly by BIOMEC of the UPC and the eHealth Unit of Eurecat. The tests assessed the muscle activation of employees with the use of three types of exoskeleton and without them, on an active population comprised of 14 employees of Nissan and Meleghy Automotive, eleven men and three women aged between 25 and 57 years.

This first evaluation revealed that the exoskeleton to support and protect lower limbs in maintained positions reduced muscle effort in quadriceps (rectus femoris, vastus medialis and vastus lateralis) by 60%, with a significant reduction in activation of the other muscles in the legs.

In addition, it was shown that the exoskeleton to support and protect shoulders in positions maintained above this area it led to 15% less activation in the anterior and posterior torso (cervical, lumbar and abdominal erector muscles), while the biceps, deltoids and dorsi muscles also had lower activity.

In relation to the combined exoskeleton that supports and protects shoulder and back, the result was a 15% reduction in the muscle activation of deltoids, biceps and dorsi muscles, as well as a signification reduction in muscle activity of cervical (25%) and lumbar (between 10 and 15%) erector muscles.

Given the positive results in this first phase of the project, the CIAC and the companies involved will undertake between February and March the second and last phase of the exoskeleton with employees of Nissan and Meleghy Automotive in their real production environment. The tests will last entire work shifts, to obtain definitive conclusions.

Other participants in the initiative are the Catalan Institute of Health and Safety at Work (ICSSL), the company SGS and Eurecat.