VIDA: smart ventilation to detect the level of purification of indoor air

A multidisciplinary group of researchers from CATMech has developed and patented an electromechanical system that automatically purges and cleans the tubes of intravenous serum therapy equipment to remove the drug that has been left in them and prevent infra-medication due to residual drug in the tubes. 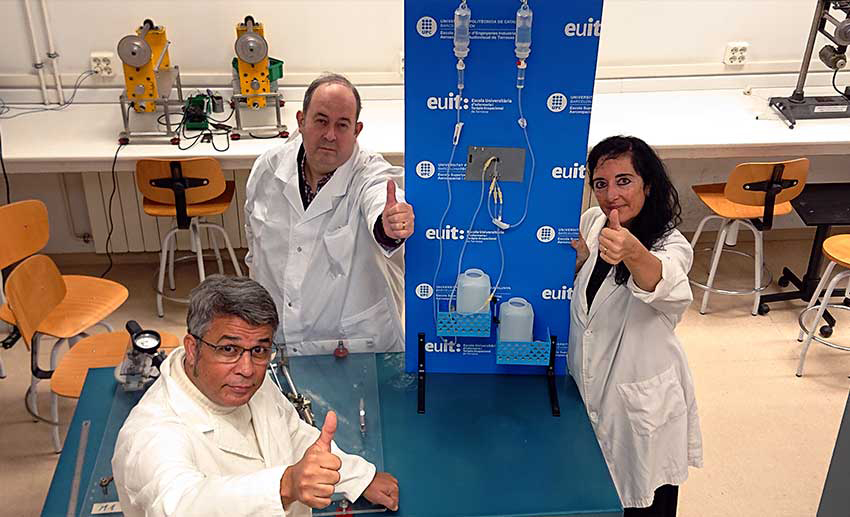 An exhaustive study of seven Catalan hospitals and 170 patients who were administered paracetamol intravenously revealed that, in all the cases analysed, the perfusion stopped and it was considered completed without purging the drugs that were left in the tubes of the system. The average amount of residual drug that did not reach the patient was 12.65 cc: an amount that represents a waste of one in eight doses administered. The study found that almost 40% of patients had re-occurrence of pain or fever four hours after having received the dose of paracetamol intravenously.

The key to this innovation lies in the positioning of another bottle of physiological serum connected in the form of a Y to the same tube in which the drug was administered, with an optical sensor installed in the drip device. The sensor is activated once the drug has run out and sends a signal to a two-way solenoid valve. The solenoid valve closes the tube that the drug goes down and opens a tube connected to the bottle of physiological serum. In this way, the physiological serum purges for a few seconds the drug remaining in the tube that has just been administered to the patient.