The first drones with robotic arms and manipulation capabilities

In our world of increasing connectivity, wavelength-division multiplexing has been a crucial factor behind the rise in fibre optic communications, as it enables an increase in bandwidth of fibre networks, so that signals in just one fibre can be superimposed up to a capacity of 25 Tb/s. This multiplexing requires two types of essential devices: multiplexers and demultiplexers, which are responsible for combining the signals at the point of origin and redistributing them at the point of arrival. 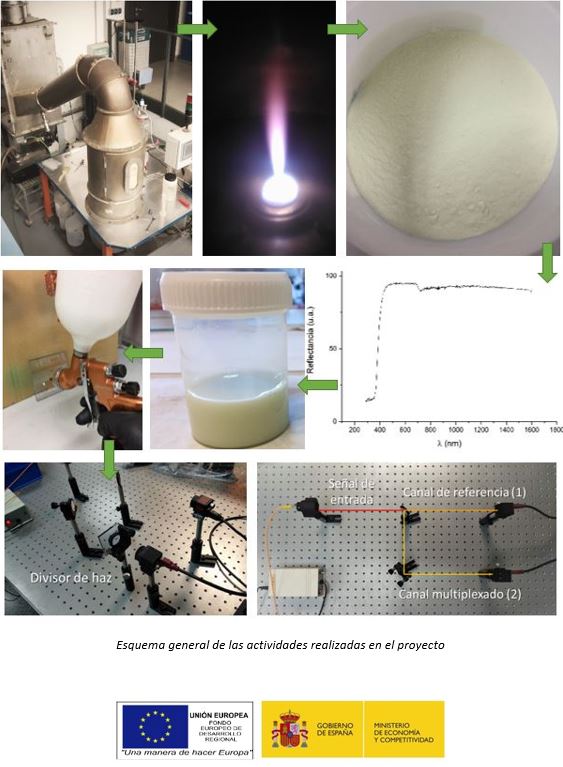 In the project, developed by the CD6 group, new beam splitters (components that can be used as multiplexers and demultiplexers for signal superposition in an optical fibre) have been produced using as a base a material that is resistant to industrial encapsulation, like polymers (PMMA, etc.). For the material to have the properties of a beam splitter, particles of various types are deposited, such as metallic and/or photochromic particles that are activated by the use of a source of light modifying their absorption spectrum. In this way, the optical channel for transmitting the information can be selected with the competitive advantage of having a more efficient production process in time and cost.

The major innovation in this project lies in the development of the process of depositing the particles on the “base” material to create beam splitting coatings. Instead of using vacuum chamber deposition, which involves gaseous elements that could contaminate the white room where the industrial process of encapsulation is usually carried out, the deposition is carried out by means of a nanoparticle spray, which produces a solid material that is also compatible with a subsequent encapsulation process.

Other project partners are Ludererra Centro Tecnológico, TECNAN and SnellOptics, a spin-off of CD6 UPC.

The project has been supported by the Ministry of Economy and Competitiveness, through the RETOS programme (RTC-2016-5526-8).